Wireless communication with mobile phones is based on electromagnetic waves carrying data through the air from transmitters (i.e. a network antenna) to a receiver (potentially the phone in your hand) and vice versa.

N.B.: An electromagnetic pulse is not the same as a frequency – it is a short blowout of man-made electromagnetic energy. It occurs as a radiated, electric, magnetic field or as a conducted electric current.

Electromagnetic radiation (EMR) can be divided into two general subgroups. Radiation with a frequency smaller than approximately 3 Phz is considered “non-ionising”, whereas electromagnetic waves higher than that are considered “ionising”. 5G wavelengths cover a spectrum up to around 52 GHz, so would classify as non-ionising radiation.

Ionising radiation – such as x-rays – has been proven to be harmful to human health when exposed to in high doses. However, non-ionising radiation – such as radio frequencies – has not been proven to cause such effects on human health, at least not to the same extent. There is, however, accumulating evidence that it can have some effect on influencing biological systems, which is why scientists suggest that more research is needed to investigate the full impact on human health. Some have therefore recommended that 5G’s implementation should be halted until the picture is clearer.

Experts at international bodies like the International Agency for Research on Cancer (IARC) recognise that there is a potential for harm, classifying non-ionising radiofrequency radiation as “possibly carcinogenic to humans” (group 2B). Some scientists suggest that this should be re-evaluated, possibly re-classifying it to a higher risk category – "probably carcinogenic" (group 2A), or even definitely "carcinogenic" (group 1).

In March 2020, the International Commission on Non-Ionizing Radiation Protection (ICNIRP) published an updated set of their 1998 guidelines on exposure to RF EMF between 100 kHz and 300 GHz, thereby covering the spectrum in which 5G technology operates. While developing their guidelines, they consider whether adverse health effects are observed and the extent to which these have sufficient scientific substantiation.

The ICNIRP evaluates that the science showing effects in the forms of heating and nerve stimulation are both substantiated enough, and are included in their assessment. However, they further state there is "no evidence" for EMF causing cancer, electrohypersensitivity, infertility, or any other health effects.

Their basic restrictions set limits with defined margins of safety, so in case a threshold is accidentally and briefly exceeded, there is unlikely to be immediate damage to human health. Body temperature  is allowed to increase up to an average of 1°C established over the whole body for 30 minutes, equalling a maximum absorption rate (SAR) of 4 Watts per kilogram, which should not be exceeded. For the general public, the safety limit is set at 1/50 of that – equalling 0.08 Watts per kilogram.

As these limits are difficult to measure in normal settings, the ICNIRP converts these basic restrictions into reference levels measurable in the environment. For example, they recommend that the general public should not be exposed to a frequency higher than x (see following graphic) if the exposure lasts more than 6 minutes. 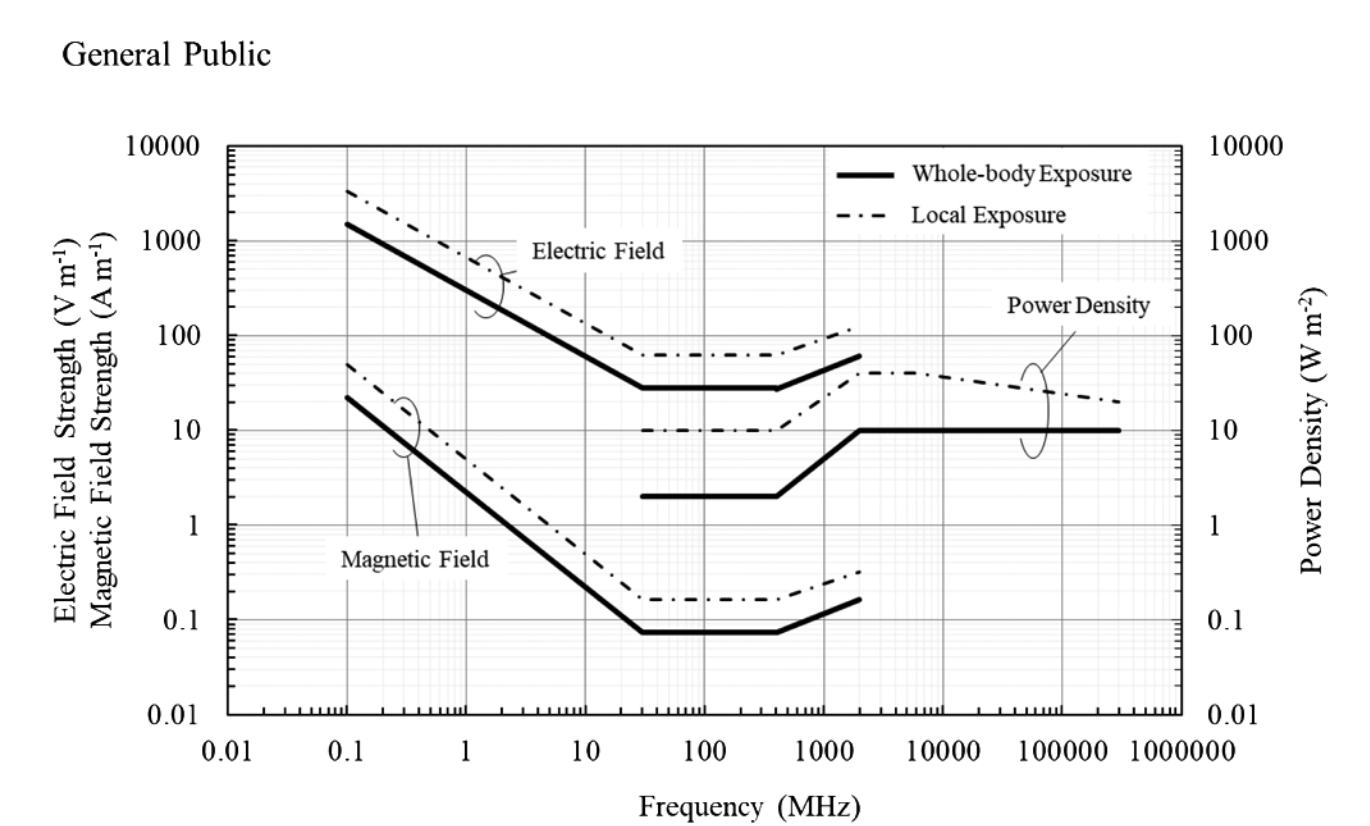 The guidelines have been criticised by scientists for not providing limits for long-term exposure and for not incorporating non-thermal or biological effects. The ICNIRP argues in their documentation that these potential long-term effects are not well studied enough to be limited by thresholds. However, some researchers recommend a more precautionary approach and as a result, "we need to reduce our exposure to RF EMR wherever technically feasible (...) considering the current science, lack of relevant exposure standards based on known biological effects and data gaps in research."

WHO - Basics of radiation

Di Ciaula, 2018, Towards 5G communication systems: Are there health implications?

Whoops! Your browser unfortunately does not support all the necessary technical parts needed to display this map. This happens if your browser is outdated or if JavaScript is turned off. Almost all latest browsers support the knowledge map system. Please use a newer version of your web browser to ensure a delightful experience. The newer browsers are also more secure. Thank you!